Be Careful What You Ask For On the Internet

Be Careful What You Ask For On the Internet

You probably wouldn’t let the Internet name your baby. So what could go wrong in naming your $289 million polar research vessel?

What happens when you are building an expensive new polar research vessel, and you want to generate some visibility for the project? Why of course, you hold a public naming contest on the Internet.

This is exactly what the Natural Environment Research Council (NERC) did.

The new ship, to be commissioned in 2019, will be capable of breaking through a meter of ice and will be equipped with advanced scientific and research capabilities. The estimated cost is of £ 200,000,000 which is the equivalent of $289 million US, or $367 million Canadian.

The Internet and especially social media are well-known places to engage the wisdom of the people in intelligent conversation. Like gravity, groupthink is a very powerful force.

Just like gravity, the hive mind of the Internet tends to pull us all down.

“Mama always said life was like a box of chocolates. You never know what you’re gonna get.” ~ Forrest Gump

The winning entry, “RRS Boaty McBoatface” with 124,109 votes, was by far the most popular choice, beating out its nearest competitor by over three to one. James Hand, the BBC radio presenter who submitted the name for fun, voted for fourth place entry RRS David Attenborough because his entry was just a joke. But once the name went viral, it took on a life of its own.

You Never Know What You Will Get

This isn’t the first online poll that got sidetracked from its purpose. In fact, it was pretty tame compared to some other examples where completely inappropriate entries created havoc.

Participants in your contest, poll or request for public input will come from a diverse population with equally mixed motivations. Here are five to consider.

A certain percentage of people think they are funny (guilty). They also believe that the Internet is a good place to share some of that humor. So they lie in wait for an opportunity to pounce on unsuspecting conversation threads. Eventually, they get bored, and they leave with their plunder of recognition, likes, and smiley faces. The passengers and crew are left wondering what has just happened to the original topic.

Although this might be a British humour nuance thing I am missing, Boaty McBoatface seems more silly than genuinely funny. I didn’t scan all 7034 entries, but a few other entries like RRS It’s Bloody Cold Here, RRS Ice Ice Baby, RRS Thanks For All The Fish, and RRS Big Metal Floaty Thingy-Thing, show how creative those Ice Pirates can be.

What is funny, in an odd way, is that people started voting en masse, all 19,000 tonnes of it, for Boaty McBoatface.

It starts out as a bit of a joke or someone making a point. Then it takes off. The rebellion sparks and the people start rioting. In this case, they vote for something silly to show up the Empire. Take that, Imperial Storm Troopers! We’re not playing by your rules.

We are rebels. We briefly spit in the face of danger from the safety of our remote devices. We are voting for Boaty McBoatface then going back to our regularly scheduled lives.

This group usually spontaneously jumps on the bandwagon and has no real organization or goal behind it other than fun and rebellion. Momentum is everything to viral.

Hijackers want to steal your audience’s attention to get their message out. Sometimes they are protesting whatever you are trying to accomplish but often it is not directly related. It could be just a few people or a whole organization. Where a rebellion is spontaneous, this group is looking to further their agenda long-term.

There weren’t any obvious examples of hijacking in the name the ship contest.

#4 — Trolls and Other Scum of the Earth

While the other groups may have noble or at least harmless motives, trolls and the other scum of the earth are there to hurt. They come from a place of bullying and hate. Some of the scariest tend to be men.

This contest seems to be absent this dynamic as well. Other polls where it went wrong ended up with Nazi-themed entries.

In most cases, if you are polling or soliciting feedback on a topic that people find engaging, you will get a certain percentage of responses that are on topic and fit the general nature of what you are trying to accomplish.

RRS Henry Worsley, RRS David Attenborough, and RRS Katherine Giles were relatively popular, and all have something to do with polar exploration and science.

RRS Poppy-Mai, an entry inspired by an infant diagnosed with terminal cancer who caught the public’s heart, is an example of a well-intended and caring public input. Had it come in first place, instead of second place, officials would have had a very tough choice on whether to bow to public opinion or chose a name that worked better for the intended purpose of the vessel. 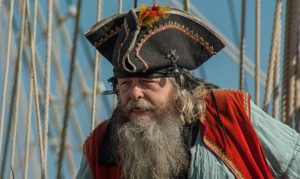 If you are going to conduct a public naming contest, or otherwise solicit input on the Internet, you need to think it through ahead of time. This one ended up creating a lot of engagement, but not everyone thinks it was a public relations success.

The NERC team clearly stated that the entry that received the most votes would not necessarily end up being the chosen name. They reserved the right to make the final decision.

You also want to consider the following:

It’s your ship. If you don’t steer it, someone else will take the helm.

You might end up with the one chocolate in the box that you don’t want.

The new ship – currently under construction on Merseyside, England – is set to cost £200 million ($290 million). Its full name will be the Royal Research Ship Sir David Attenborough, in honor of the world famous naturalist and broadcaster, who will turn 90 on May 8. The ship's remotely operated undersea vehicle will be called 'Boaty McBoatface'.