How to Rescue Your Business with a Little Maslow’s Cat

How to Rescue Your Business with a Little Maslow’s Cat 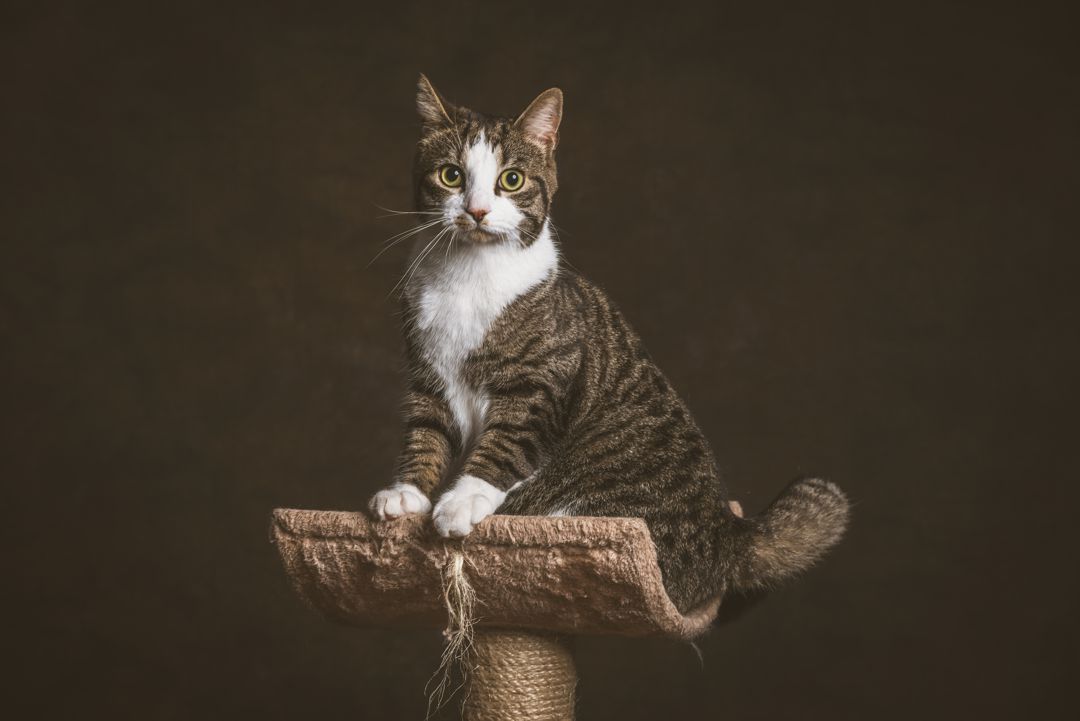 Maslow’s hierarchy is often expressed as a pyramid and frequently used to explain the basics of human nature based on five levels of needs.

According to established historical lore, ancient Egyptians revered cats. Perhaps pyramids were built to house ancient kings, but that would not have stopped a cat from sitting on the top of one and looking down to watch everyone else.

Maslow’s cat can help us better understand those needs when facing today’s new-world of excessive information, challenges, and attitude.

We’ll get back to rescuing your business in a bit.

Maslow’s Cat – A Hierarchy of Needs and Aloofness

First off. I am not a cat. Similarly, I am not another person.

However, I’ve observed other people – and cats.

Maslow’s hierarchy often seems a little idealized. The model relies on a belief that all people are striving to become better. Cat’s don’t have this issue. 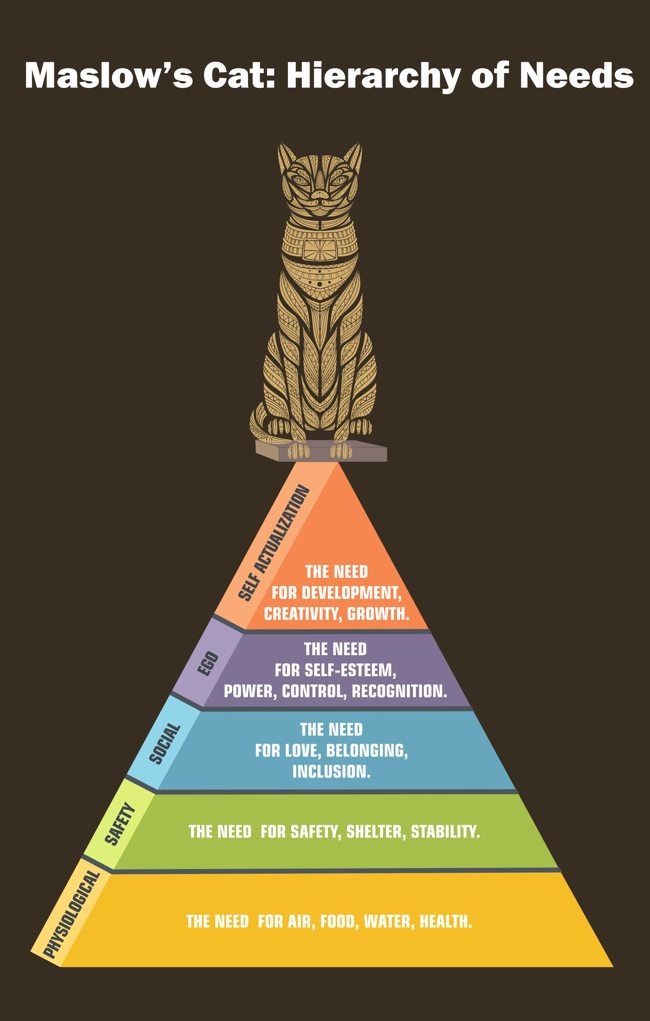 Physiological Needs and Safety Needs don’t differ that much for cats. Cats have domesticated humans to provide a little extra safety. In the wild, a solitary cat could starve if injured and unable to hunt. People have turned out to be quite useful for long-term survival.

Without people, there would also be fewer boxes and other containers to occupy.

Most cats will seek out attention when desired. They will learn to ask for food and other necessities.

They may reciprocate by bringing their people dead creatures.

Once a cat has the basics covered, they can start training people to seek out their attention. This exercise includes withholding affection and rejecting food they just asked for – proving that they are superior and you are there to serve them.

Advanced cats may make seeking their attention a little dangerous, even if they initiated the initial interaction.

“Less than 2% of the population achieves self-actualization.” ~ Maslow

Cat’s don’t seem to suffer from this affliction of striving to become and achieve more. It manifests differently for felines since they already know they are at the top, even if they appear to be less than perfect by standard, objective measures.

So instead, we see it show up in aspects like curiosity.

“What happens if I knock this glass off the table? And this one? What about this one?

Sometimes they will strive to make you better even if you don’t want to improve. For instance, your cat might bring you live food to practice hunting in a controlled and safe environment, like your kitchen.

Or maybe hearing you scream amuses them. Hard to know for sure.

Cat’s are naturally less group-focused as a large cohort of similarly defined (not a group) mammals than dogs or people. Moving up the hierarchy, we find this divergence from human needs behaviour amusing. We call it being a cat.

Yet, we often find this conduct less amusing in other people.

Cat-like human behaviour is often motivated by a perceived lack at some level, even though it ironically holds them back from achieving that level of need and thus feeling self-actualized.

There are people in the world who are doing well, and also people who are struggling.

During a disaster, economic slowdown, or pandemic, more people are at the struggling end of the spectrum. At the same time, not everyone is in that box.

Consumer spending drives the economy. If a large percentage of the population is fearful, their buying patterns will shift no matter what the government does. No spin will get everyone to risk their real or perceived safety.

You must address the underlying causes before the economy will fully recover – this is simple supply and demand.

Even so, some things will be permanently different.

Some people are struggling at the bottom of Maslow’s hierarchy. Primarily, they are focused on food, shelter, and safety. Desperate people often take more significant risks.

At the expense of lower-level needs, some money will often go to diversion from the hard realities – like entertainment when stuck at home. Time versus urgency is at play.

Some people are doing quite well. At least on the surface. Yet, they may still feel threatened at some other level. What is the point of success and status if you can’t enjoy it? What happens if someone takes it from me?

Maybe the threat is further in the future or just hidden from us.

Some of those doing well will take Maslow’s idealistic approach of working at the top of the pyramid to improve things for themselves and those around them. Others will seek to hold onto the past.

Some will be cats, no matter where they are in the hierarchy.

While the cascading supply chain can be long, your customers are either consumers or businesses that serve consumers.

Understanding the chain will give you enormous insight as to where your market is focused right now.

If your business supplies something in high demand or desire, it may be thriving.

Or it may be suffering because the costs of doing business right now are higher than before – even though demand is strong.

Screaming in the night like tomcats fighting over a female cat in heat, won’t change the bigger picture. At least not without many wounds to yourself. It might also annoy the neighbours.

How can you serve your clients and customers where they are now?

That is where you should be focusing the energy.

Your business is composed of people. Where are they all in the hierarchy right now?

Just as importantly, where are you?

Carrying the stress of running a business is enough in the best of times. During a struggle, being responsible at some level for other people and living with ongoing uncertainty can take a toll. Low-level stress with a helping of ongoing disasters is insidious.

Business is inherently risky. Keep the stress down by not making it your identity or life and death.

From that perspective, this is a time to be a cool cat.

The Final Words From Maslow’s Cat 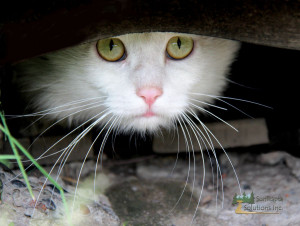 The cat to human analogy is not perfect. However, it is fun to put a little spin on a tough and often dry topic.

Keep in mind that cats can often learn to be happy in groups given the right environment and the satisfaction of their lower-level needs.

The same is true of people. As we move up the hierarchy, the need to compete violently to survive declines dramatically. We’ve proven this by forming large societies based on some universal, shared principles.

As entrepreneurs and business leaders, we can achieve more with less risk by holding an abundance mindset, while balancing serving customers with competing for business. Usually, the more you focus on customers, the more successful you will be.

Understand where the person you are talking to is right now in Maslow’s hierarchy – around any particular topic. Help them there.

We also have two distinct advantages in rescuing our business:

Maslow’s theories were influenced by his time spent visiting and working with First Nations people including the Blackfoot here in Alberta.