Stuck? Begin With the Start in Mind

Stuck? Begin With the Start in Mind 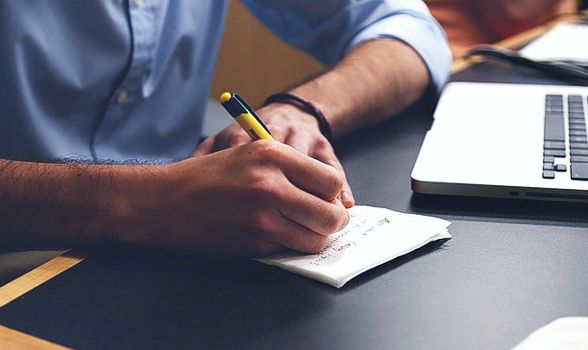 Are you excellent at picturing the end-solution and then working backwards? There are times when that approach fails.

As an entrepreneur, I can imagine, in great detail, a lot of possible things I could do or build. I’ve run into plenty of others in the same boat. Ideas are rarely in shortage.

Call it chasing the squirrel or the shiny blue ball syndrome.

The solution in most cases is to learn to say “no” or “not right now” so that you can focus on a few things from start to finish. Steve Jobs did this when he came back to Apple in 1997, axing 70% of the hardware and software products they were then producing.

Strong execution is usually more important than a lot of great ideas.

This habit is based on the premise that if you know what you want and can create it in your mind, you can then create it in the real world. Knowing the destination allows you to work backwards to the path to get there. Since men are known to focus on solutions, this habit can work well for us.

Sometimes the result is exactly like you imagined it and sometimes the destination has some flexibility.

Occasionally, I only have a vague sense of what the end looks like. Or which of many destinations to pursue.

Often you hear that real leaders make quick decisions and move on. A wrong decision is better than none at all. This is true in certain circumstances. But, making bad decisions is easy. Hiding a bad habit inside a good one doesn’t make it good. So we need something better.

Researchers and scientists face this dilemma all the time.

So do creative and innovative entrepreneurs.

Since a solution focus fails us in this circumstance; if you don’t know what the end solution looks like, how do you start?

Begin With the Start in Mind

Here are a few of the ways you can begin when you are not sure about the end or the solution.

Get creative. Write every idea down. Get input from your team, your advisors and your customers.

Pick something and begin.

Try stuff. See if it works for you, your clients, or for your team.

Unlike science experiments in school, the instructions aren’t in front of you. Be prepared to throw away false starts up front. Or come back to them later if the next step becomes unclear.

You can save some time avoiding the obvious things people have already attempted by reading or research. It is not necessary to find out if tongues stick to frozen metal. Plenty of others have tried that already.

Sometimes, the goal of the first attempt is only observing what happens.

Then when you begin to know something about the parameters involved you can start to measure to establish the rules and influence the outcomes.

For example, in figuring out what marketing message might work you can use A/B split testing to see which message results in the response you want. You can also vary the message AND the medium to find out where each message performs the best.

As children, we are fine with failure. By the time we reach manhood, we’ve learned to fear it. Maybe it is because we are metaphorically taller and have a fear of falling from our lofty heights.

You know you will fail. So celebrate the failures and what you learn from them.

At least now you know what doesn’t work. You are now free to try other possibilities.

Innovation and creativity require putting yourself and your business on the path to failure. Do it often enough, and your products and services become a lot better. Then you win.

Men have plenty of intuition, but often we’ve been conditioned to put it aside.

When you don’t have the end clearly in mind, you don’t know for sure if you are on the right path.

So you have to pick something and run with it for a while. If you’ve done your homework as much as you can along the way, you can rely on your gut feelings to pick one of the options and go yet a little further.

The Key Is To Begin

Few people gain additional insight by standing still and not learning something new. But as you start moving, new options and clarity will be presented.

At that point, the end may reveal itself.

On the other hand, sometimes the end doesn’t become apparent until you’ve reached it. That happened to me on a winding dead-end highway (brakes = good thing) and more than once in the creative process.

So if you know the end, terrific. We understand how to work with that.

Otherwise, you need to begin with the start in mind, and keep starting until the path to an end appears.