Don’t Annoy The Bull And Other Lessons From The Field

Don’t Annoy The Bull And Other Lessons From The Field

Before you can avoid the bulls, you need to learn to spot them. With people that can be a challenge.

Some years ago we were visiting Dorothy and her spouse, friends who lived in the country near the Alberta foothills. We were city dwellers, so we enjoyed getting out of town for a little adventure.

After sitting around chatting for an hour or so, we all decided to go for a walk before it got too dark. It was a mid-winter day, but the warm Chinook winds had been blowing earlier in the week, and the snow cover in the fields was not too bad. So we bundled up in our winter coats and boots, grabbed the dogs and started out.

A walk in through country fields typically means crossing land owned by a few different people and in this case, crossing a field with a herd of cattle grazing. The sun is low in the sky this time of year, and it was chilly enough that we could see our breath though fortunately there wasn’t much wind. The cattle were about 100 feet north of us, and we were walking across the hard packed snow with some well grazed-stubble poking through.

Being my normal humorous self, I made a joke something along the lines of “Good thing there is no bull here.”

Dorothy casually said, “There actually is a bull in this field. But he is not overly aggressive, and we should be fine if we leave him alone and don’t get too close.” Having heard a few stories about close encounters with bulls in the past, things suddenly got a little quiet for a moment as I looked around for possible escape routes.

That awkward moment of silence lasted about 20 seconds. My dog, a young male border collie named Calvin, took off, ran up to one member of the herd and started barking at it.

Dorothy said to me, a little concern rising in her voice, “That is the bull your dog is barking at. It would be a really good idea to get him to stop before it gets annoyed.” Annoyed bull did not sound good as we were now almost in the middle of the field and any exit was painfully far away.

Calvin was not a country dog, so he was a little wired just being around cattle. At the time, I thought he decided that he could get the cows moving to satisfy his herding instincts. I realize now that he had probably sensed that one particular animal, the bull, was the most dangerous out of 50 others.

It was Calvin’s instincts that read the herd, and it was also his instinct to warn us and chase off the bull.

Raw instincts don’t always lead to great outcomes.  Back then, I remember reading about how dogs tend to run back towards their packs (people) when they are being chased by bears or, in this case, a bull.

If you have ever tried to control a young, high-energy, focused dog from 100 feet away, you know that “stop” is easier said than done. Going to the dog was not an option either for obvious reasons.

A few things we know about bulls:

Lessons From The Field

The herd bull is the ultimate alpha-male in cattle society. That works out okay for cattle.

Humans with bullish traits are another matter.

“There comes a time in the affairs of man when he must take the bull by the tail and face the situation.” ~ W.C. Fields

Human society works differently, or at least I like to believe it should. There are some lessons from this story to learn about dealing with difficult people in business, sales, and life.

Learn To Spot The Bull – To the inexperienced eye, cows, cattle and bulls all look rather bovine or cow-like. Being able to spot the bulls in the herd quickly is useful for your survival.

Some people refuse to change their opinions, mind or vary from their set path no matter what evidence is presented.

Don’t Annoy The Bull – At best you will have an angry encounter. At worst the bull will trample whatever business proposal you put out or gore the project you are trying to implement.

Avoid The B.S. – Once you step deep into it, it is hard to get clean again. Sometimes it is hard to see it, or it is disguised as truth, but taking your time navigating around it can save you major heartache later. 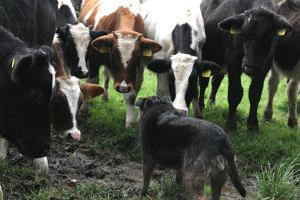 More Than One Bull – Unlike herds of cattle, some human bulls will tolerate and even be attracted to other bulls. This herding tendency makes avoiding them more difficult and the likelihood of an encounter higher, especially if there are a lot in one organization. Often bulls will become bullies in groups.

Instincts – Having good instincts on detecting and dealing with bulls is useful. Even better is mixing instinct with training and experience, so you react correctly to the warning signs.

Young Dogs – Young dogs often have good instincts, courage and a lot of energy, but often lack the wisdom on what to do after they spot the bull.

Old Dogs – Old dogs don’t get as stressed out by bulls. They also tend to resist learning new tricks and spend more time sleeping. They can teach the young dog a few tricks.

Bullheaded – Some people refuse to change their opinions, mind or vary from their set path no matter what evidence is presented or what the impact will be.

Bull In The China Shop – When their role or status is threatened they will take down everything and everyone around them without worrying about repercussions. Something as simple as a lack of snowflakes on red cups will cause a bull to feel threatened, and they will destroy the shop that brings them their coffee in the process.

Meanwhile, Back To The Bull And Dog

The bull had either been around dogs before or Calvin was too insignificant a threat in its mind, but either way it just stood and stared at the dog with his massive head slightly lowered as if it was just interrupted from eating. For a moment, it was a standoff between the bull and the dog.

Then suddenly the dog broke off the engagement and came trotting back.

It was a combination of luck, Calvin realizing that the bull was not going to move, lots of yelling, and many hours of training, but somehow I got him to come back, without the bull in hot pursuit.

One thing is for certain, counting on luck when dealing with the bulls you will encounter in life is not a great strategy.

Can you spot the bull in your life?