At our last house I built a big cedar pergola on our wooden (untreated spruce) 2×4 deck we inherited. I made the pergola only using screws and bolts (no nails) in case I ever needed to repair it. Just prior I had stained the deck with 5 year deck stain. I figured it would last at least 3 years. 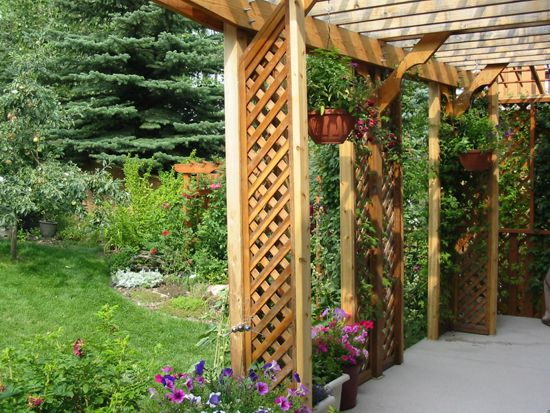 It started peeling after a single winter.

So every two years I was faced with repainting the deck. This is a non-trivial exercise.

To make matters worse, the 2x4s were subject to rotting as they aged and cracked. Replacing 2x4s was also getting annoying.

So I decided to put on a vinyl waterproof decking surface.

Essentially you lay down plywood, coat the vinyl deck and plywood with glue and then put down the fabric. To keep it all waterproof you need to have a contiguous sealed surface or water will go underneath and rot the plywood and deck.

This meant I needed to remove the pergola I had built as the option of working around it would be painful and non-waterproof. By then I had mature clematis vines growing up the trellis and the structure weighed well over 1000 pounds. So this was not going to be a trivial exercise.

One option was to get 6 strong friends together at once and lift the structure off the deck and onto the grass, put in the decking and then get them all together again to put it back. That still didn’t account for the trellis and vines, the sloped back yard or what would happen if one person slipped.

Besides I had moved recently and getting together 4 guys once had been a big stretch never mind 6 on two separate occasions.

So I sat on the deck and thought for a bit.

And then I came up with a plan.

I built a couple of frames to lean the trellis on so the vines would survive and not break.

The structure had 6 pillars. So I made six sets of stilts.

I screwed on a cross beam at the bottom and used a car jack to raise one side of the pergola and then attach the stilts. For safely I also attached a few ropes to the top of the pergola as the structure was not designed for a lot of sideways stress and the pillars were 8 feet tall (9.5 feet with stilts). If you understand the principles of levers you understand what could go wrong. Of course you have to accommodate the lift and its impact on tilt, but you can slowly adjust the ropes as you raise it.

After raising one side, I raised the other and now had the pergola standing on stilts with the trellis safely away from the deck.

Because there were six pillars, I could remove two sets of stilts and work underneath the raised pergola.

It took a bit of planning but I could move the stilts around, put down the plywood and then roll out sheets of vinyl deck surface (half the deck at a time).

After creating a waterproof deck, I reversed the process and sealed the holes used to attach the pergola to the deck.

No more scraping and re-painting every year or two.

(Then we moved but that is another story.)

How This Applies to Business

Why this approach is bad in business:

Bonus: Know when to use the right tools (like Manifast).

What have you learned from DIY projects?