I was placing an order for some furniture from Staples Canada for our office. As I do occasionally, I add things to my shopping cart that I might be interested in (so I can find them faster) and then clean it up before placing the order.

In this case I got distracted and then it was almost time to head out the door. So I pressed checkout without stopping to think. I accidentally ordered two different items instead of two of the same; one I didn’t even want.

No worries, I will just cancel the order or change it.

“We are sorry; your order has been submitted and can no longer be changed. Please call our customer service center.”

Did that. They are closed until tomorrow.

So I e-mailed customer service.  No reply as of the next day so I phoned back.

Customer service was great. They would cancel the order for me and I should just place the order again for what I really wanted.

Two days later I got a reply to the e-mail I sent.

The order is in transit via a third party shipping company and cannot be cancelled. When it comes just call us and we will arrange for it to be sent back.

Now I have two orders coming, one of which is wrong.

When the wrong one arrived we did that and they sent the shipping information via e-mail.

Not perfect but nothing to get upset over, right?

When Will Your Ship Come In? 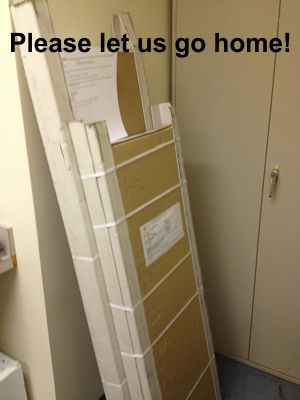 Called "DOWN" (fake name) for pickup.

(I won’t name them but if you mix red, yellow and blue you will get the color of their trucks.)

Attempt 1: Driver showed up the next day without a cart. Apparently that is our fault for not telling them to require a cart. Our guys offered to carry them to the truck but he said it was 3 blocks away. Odd, I had seen it in the alley two buildings down earlier.

As well, there was something about the paperwork being wrong but one of my team members had dealt with DOWN during this visit so I got the information second-hand.

We would have to call in for pickup again and specify a cart was required.

We assumed that the guy just had not seen the shipping label we had printed from Staples and taped to both furniture items.

Attempt 2: Driver showed up with a cart. Was emphatic that the paperwork was wrong and there was nothing he could do. Sort it out with Staples.

Called Staples and they were surprised as they do this all the time. They connected with DOWN and arranged the next pickup and specified cart plus a waybill would be included.

Attempt 3: Snow day. The original driver was away and the replacement showed up much later than normal.

No cart. No waybill.

He looked at the pick-up order and sure enough, both requirements were listed. He apologized.

It was not his truck and the cart was locked up and he didn’t know where the waybills were. He could take them and do the paperwork at the warehouse, but again, he doesn’t have a cart and he is running late.

He said no need to call in and he will leave a note for the original driver to come back tomorrow.

The next day I got a voice mail from DOWN that they had attempted to deliver a package from Amazon to my building and because it was an apartment building, they were unable to get buzzed up.

They left their phone number twice.

And the 18 digit alphanumeric tracking number once.

After listening to the message 18 times I thought I had the number right.

I felt like I was on the Amazing Race.

So I called them back.

To server you better please enter your tracking number.

The alphanumeric tracking number. You have to read it. What is the likelihood of getting it right on first try?

“We are sorry, that number is not in our system. The tracking numbers normally start with One Zee”

(Really, the computer only knows the American version of the alphabet?)

“Your package was unable to be delivered because no one was there to pick it up”.

I now have no more information than before and still no books coming.

Press 1 or 2 for things that don’t match what you want.

We are sorry that is not a valid choice.

“We are connecting you with a real person.”

We were unable to get into your apartment building.

I assured them we were in an office building.

They told me they had no way of knowing until they got there.

I would have thought they would know every building in town by now. Google does.

We've been getting packages here for 11 years without this coming up.

Apparently it was because Amazon had not included our company name on the package. DOWN fixed that.

The Next Day: Our DOWN driver delivered the Amazon package. He asked one of my team if we had sorted out that other issue yet but didn't offer to take the furniture.

I was not there. Probably a good thing in hindsight. Really.

How does this story end?

We have no idea. We are into week 3 and they are looking into it and will get back to us.

Note that Staples had in fact provided all of the required information the first time.

Update (11 Dec 2013): After two additional visits, they picked up the furniture. No cart and no waybill but we did help the driver load. Hopefully this is the end of this story.

Update (12 Dec 2013): DOWN tried to deliver one of the packages we just got rid of, back to us. We refused delivery. Apparently they didn't take the old label off and the new waybill was only on one package.

The point of this story is not to bash DOWN (even if you figured out who they are).

Joe Calloway is entirely correct. Very few companies do the basics very well. Excel at what matters most and you will win.

Even against the big “DOWN”s driving a mix of red, blue and yellow trucks, who have apparently forgotten how to pick up packages.

And to have some fun. Tragedy or humour; same events: