“Learning” the Fiddle (How Hard Can It Be?)

“Learning” the Fiddle (How Hard Can It Be?)

What are you doing to learn something new?

Your future success and even mental health likely depends on it. (I'll come back to this.)

Bob Burg asked me to share about my background as a musician and so I wrapped it up in a blog post with some other things.

A little more than 8 years ago I took up playing the fiddle. I was just shy of 40 when I did it and had been running our business for about 4 years at the time (and apparently didn't have enough to do).

I had been enjoying some Maritime music groups and they often had fiddlers in them. Then I started listening to Natalie MacMaster, a well known Cape Breton fiddler.

I saw a course being offered through Continuing Education so I signed up. "How hard can it be" became my mantra.

Our instructor was a fiddler named Tracy with an amazing sense of humour.

She asked everyone in the room what instruments and musical talents they had from before. I played the trumpet in school and the guitar on and off since high school.

She then informed us that "none of that will help you in the slightest. The violin is nothing like any of those things."

She was right. And it actually was pretty hard. 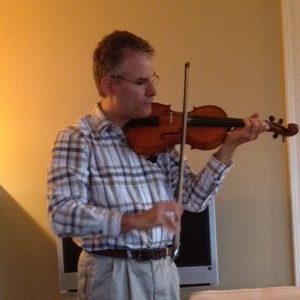 I am probably less than 30% of the way to that number. There are 10 year-olds that are much closer than I am to mastery. Doing the math, at my present rate of learning it will take another 20 years to get there.

Learning is the Key

But that doesn't matter.

It is the journey of learning that matters.

For me, nothing relaxes me more after a busy day of being an entrepreneur than spending an hour or two playing music; by myself or with others. I am also an introvert so this is my recharging cycle.

And there is another huge benefit.

Evidence is now showing that keeping the mind actively building new neural networks will help prevent the onset of dementia.

Consuming entertainment (television) does not build these pathways. You need to be actively striving to learn.

Out of the 16 people in that beginner class, only 2 or 3 kept playing after the course was over. Half didn't even finish the course. I would be willing to bet that I am the only one left playing out of the original group.

Funny thing is, I have seen these numbers play out in almost every aspect of life.

Getting good at something takes work. It takes practice and commitment. Most people get good at one or two things and coast. Often for their entire lives.

Learning to learn is the key.

This is true for business as well.

So find something new you want or need to do (or get much better at something you already know). Learn how to do it. Stick with it until you are really good at it.

And that is part of what enables people to achieve their full potential.