Power of Gratitude For Healing

Power of Gratitude For Healing

Note: This post will deviate a bit from the normal business and personal development focus. I make no apologies. I write for myself just as much as I do for my readers, and I needed to write this even though it was hard, really hard.

The Hidden Event At The Go Giver Retreat

As I mentioned in my prior posts I went to The Go Giver Retreat in West Palm Beach in April 2012. The first day of the event was fanstastic. The speakers were awesome, I had the opportunity to connect with speakers and participants, and things were great.

I went for dinner with Deb to a nice Italian place. During the drive back the skies opened up and a thunderstorm hit us. We were in the hotel lobby when my cell phone rang… it was our dog sitter.

Our 14 year old border collie was going for a short walk in the off leash park behind their place and had suddenly collapsed. Calvin died within a few minutes.

I spent most of the night not sleeping. We also decided to cut the vacation part of the trip short but I did finish the 2nd day of the Go Giver Retreat and we spent the next day walking on the beach and sight seeing before heading home.

This post is not about my grief. It is about the power of gratitude to heal.

Gratitude and appreciation focus your brain on what you have and not what you don't have. In addition to being an enabler for attacting more good things, gratitude also helps you heal.

Our minds are built to see negative. It is part of our survival mechanisms.

Gratitude, appreciation and visualization of a positive future are our tools to override our instincts.

Calvin was the first dog Deb and I got together but not my first. He was a rescue dog from the Calgary Humane Society. He was being fostered with a lady who worked there and had a 90 lb doberman. I was totally fascinated by border collies and we had done lots of research prior to making this decision. We thought we knew what we were getting into. 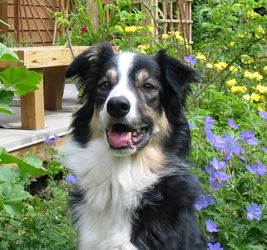 After first meeting the 3 month old bundle of energy, we decided to name him after Calvin of "Calvin and Hobbes" fame. We couldn't have chosen a more appropriate name.

After eating a meal Calvin would tear around the house for 30 minutes on a sugar rush. He would grab things and try to get us to chase him to get them back. Shoes were one such thing.

The third night we had him he suddenly stopped. Reached over and grabbed the curtains in the dining room. A quick yank and off the wall they came. Fortunately, he was pursuaded to not do that again.

We picked him up after his trip to the vet to get um… well less fertile, and we were told to get him to take it easy for a few days. That was not on his mind at all. Still under the influence of the anesthesia and wobbling when he walked, he kept wanting us to "throw the bal, throw the ball" with the determination of a border collie. 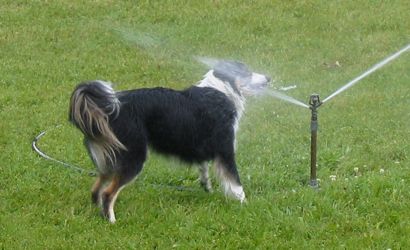 He was extremely eager to please, learn and very food motivated. So we taught him lots of tricks. High five, shake a paw, roll over each direction, "hands up, bang, fall over and play dead", spin left and right (he knew the directions by name), etc.

His best trick ever was go hide. If we had a yummy treat and told him to hide, he would attempt to find a location where we could not "see" him. If we could see any part of him, we would yell "I can see you" and he would try again. We were at a picnic site once and did the trick. The trees were not big and he tried to hide by pressing his nose up against a tree and standing so his body was behind the tree. Brilliant attempt but we could still see him. So he ran round in a panic and then found a dead tree stump and lay down behind it. Yes! That is when we were sure he was not just memorizing the hiding spots. 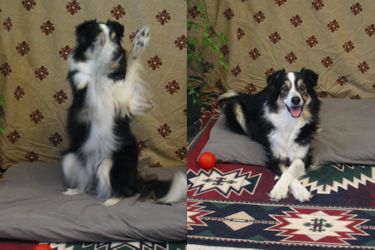 He also invented his own tricks. When he was young he was determined to pick up 2 squeeky balls in his mouth at the same time. He eventuall mastered this and set off to get three in at once. We added the numbers to his vocabulary and would tell him how many we wanted and he would come back with the right number most times, even if it took him 10 minutes to get the third in.

Calvin liked to announce himself when he arrived. He loved people and attention. When we started him in dog agility, the first time he entered the facility he let out a mighty "woof" when we entered and everyone turned their heads.

He truly loved agility. Jumps, tunnels, walls, bridge, teeter totter, tires, everything. If you didn't clearly indicate the next obstacle far enough in advance (the next AND the next) he would stop, spin and bark at you (or guess for you and head off in the wrong direction). He was pretty fast physically and mentally so we really had to up our game to keep up our part of the partnership. He really kept the crowd watching with his antics and close calls. 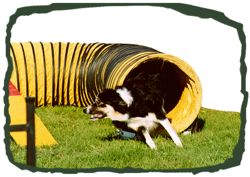 When they were announcing results, he would seem like he wasn't paying attention, but when they called his name he would bark and then race up to the prize table to see what he won.

Border collies sometimes chase lights. The reflection of the sun off a shiny object was all it took as long as it moved. It was very noisy game becuase he also like to bark at the lights. One day while driving the reflection off my watch caused him to jump into the front seat and bark. Needless to say that was not brilliant and I stopped wearing a watch until he was older and understood the "not in the car" part.

One day I was stopped at some lights and there was a pop song on the radio where the chorus had the words "kiss me" in it. I was singing along (yes I admit it) and suddenly Calvin reached over and gave me a big wet one on the cheek.

Calvin also got to try his paw at sheep herding a few times when we entered him in sheep herding clinics. He was a solid worker but we didn't have the time, sheep or money to keep it up.

Frisbee was his thing too. He didn't just chase it, he knew where it was going to go and went there.

He learned to swim at about 6 months and loved it. He had long fur so in the summer he couldn't chase a ball very long before overheating. In the water he could go all day.

No ball or stick to fetch? Not a problem. He would make splashes and then bark and bite them. When he was doing this he was oblivious to anything else. Like floating down the river and disappearing into the horizon with us running along the rocks on the shore. With all the high pitched barking, the serentity of a lake was lost but he was having fun. 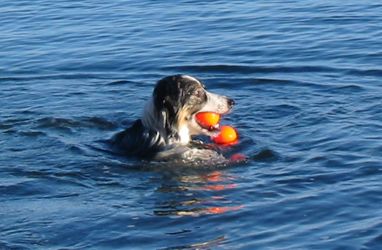 He liked to play with flies and spiders. Flies on window. Catch. Release. Catch. Release. Opps. Find another one. He played with spider for 45 minutes before he pawed it a little too hard and it didn't move again.

I used to think dogs chasing their tails were a few watts short of a lightbulb. Then I watched him. He would spin for 5 minutes and keep flicking his tail just out of his reach, closer then farther away, lunging with his mouth and pulling the tail away. At the end he would "let" him self catch it. 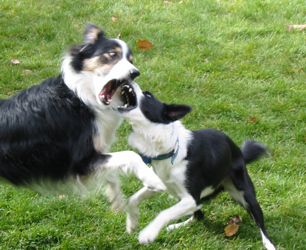 He had a bit a temper at times. When he was young he banged his head on the wall and then growled at the wall. Before we put in the fence we had him on a wire line attached to a stake. He ran across the yard and "gawk" suddenly stopped. He turned around and grabbed the plastic coated wire and spent thirty minutes pulling on the wire and growling at the wire. That became a favourite game later.

Kong on a rope. Buddha (rope toy). Whack. Whack. Ow. Whack, figure of eights like nunchuks and no ow.

The first four years of business I worked at home. Calvin would lie on my feet all day. Miss that.

If Calvin wanted something he let you know. Emtpy water dish? Bark or huck it at your feet.

He also had a lot of empathy. If you were upset he would come over and try to cheer you up.

One night he chased some deer across a busy road. When I finally caught up he was coming back and about to cross the road. Lots of cars were coming. I yelled at him to "lie doon" and he did. When the cars passed I went over and got him.

He used to think that stay meant his stomach had to stay on the ground. If he got bored in a long stay, he would crawl along the ground and go visiting; careful to never let his chest leave the ground.

He thought he was an alpha. But it rarely worked out well. So I called him an alphalfa.

He met another male dog named Hobbes in the off-leash park. He thought Hobbes was a girl. We both (the other dogs owners and us) yelled our dogs names then laughed our heads off.

When I was playing my fiddle, he would start howling if I played the open E-string a lot.

He was a professional begger with visitors. He would find someone, get their attention and then start running through his bag of tricks until he got a treat. One summer BBQ he got to try dried seaweed. 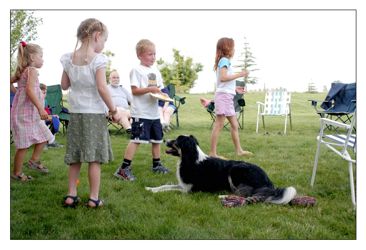 The last year Calvin started losing his hearing. He stopped howling and stopped barking at the coyotes in the distance. He was determined that pointing meant there was food over there.

There is obviously a lot more to be grateful for.

I miss you buddy and will alway cherish everything about you. You were an amazing friend.

And I am grateful we still have Kaylee with us. Our other border collie. 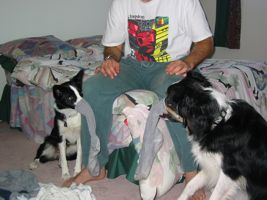 Please share a story about your pet in the comments. Let's be grateful for what we have and will still have in the future.